By Manolis ManousakisJune 20, 2019At the residency, Blog
No Comments
Action Without Action (Koumaria version)
What is sound on a fundamental level? How can it be experienced as directly as possible and which obstacles can be removed? What can sound reveal about our environments? Should we consider the politics of the materials that we use to create sound?
Action Without Action, is a radical sound installation by Joshua Legallienne that attempts to address these questions. At its core, the work explores the possibility of producing complex sound from a single material: a biodegradable plastic sheet. The impetus for this project has political and ethical motivations as well as its ability to offer high-fidelity sound with a perfect signal-to-noise ratio. It allows for a true exploration of sounds at the threshold of perception, where the line between sound and silence is ambiguous. The piece is part of a collection of works that produce acoustic sound through kinetic action without the use of loudspeakers, electronics, or conventional sources of energy. All of these works are unmediated and are constructed from materials not usually associated with the creation of sound, reliant instead on natural phenomena and kinetic actions. In Action Without Action, a giant biodegradable plastic sheet is hung vertically from the ceiling of a space in order to produce a range of complex acoustic sounds and rhythms once excited by very subtle changes in air pressure. The material was chosen because of its particular physical properties, which allow the sheet to animate easily, causing the material to create sound as it interacts with itself. Due to its construction the material reveals the invisible and inaudible qualities of spaces; being able to sonify infrasonic (sound waves below the lower limit of human audibility) variations in air pressure and visualising the airflow of an environment and the movements of those who inhabit it. The work can be conducted in both urban and rural environments; sheltered and exposed locations. There is an element of site-responsiveness that is crucial to the piece – the outcome of the work is shaped by influences out of the artist’s control – linking sounds to specific locations. Environmental conditions play a large role in the structure of the work, which can dramatically alter the range and quality of sounds that are possible.
In the nature of the Koumaria Residency, the artwork became a collaborative effort and was scaled up to monumental proportions. A line was tethered 250 meters across a valley in the Sellasia landscape, attached to two points either side of the valley. A sheet of biodegradable plastic (7m x 3.65m) was attached to the mid-point of the line, which was then manually lifted in situ to allow the wind to move the sheet and thus creating sound. A line of such length caused issues with torque as the wind put huge amounts of pressure on the line and the people holding it! During the process, the line broke multiple times and got stuck in many olive trees – it looked like the piece was not going to be possible in this location. However, after four hours and the efforts of a team of 12 people in multiple locations, the line was in place and the sheet was elevated and creating sound in the Sellasia valley. It was a huge endeavour and I am grateful to all that dedicated their time and effort to realising the piece in the scorching summer heat.
Co-ordinates for ‘Action Without Action’
Distance = 248 meters
AWA starting point (rooftop): 37°10’12.0″N 22°24’13.1”E (37.169995, 22.403647)
AWA end point (clifftop pool): 37°10’07.5″N 22°24’20.9”E (37.168740, 22.405795) 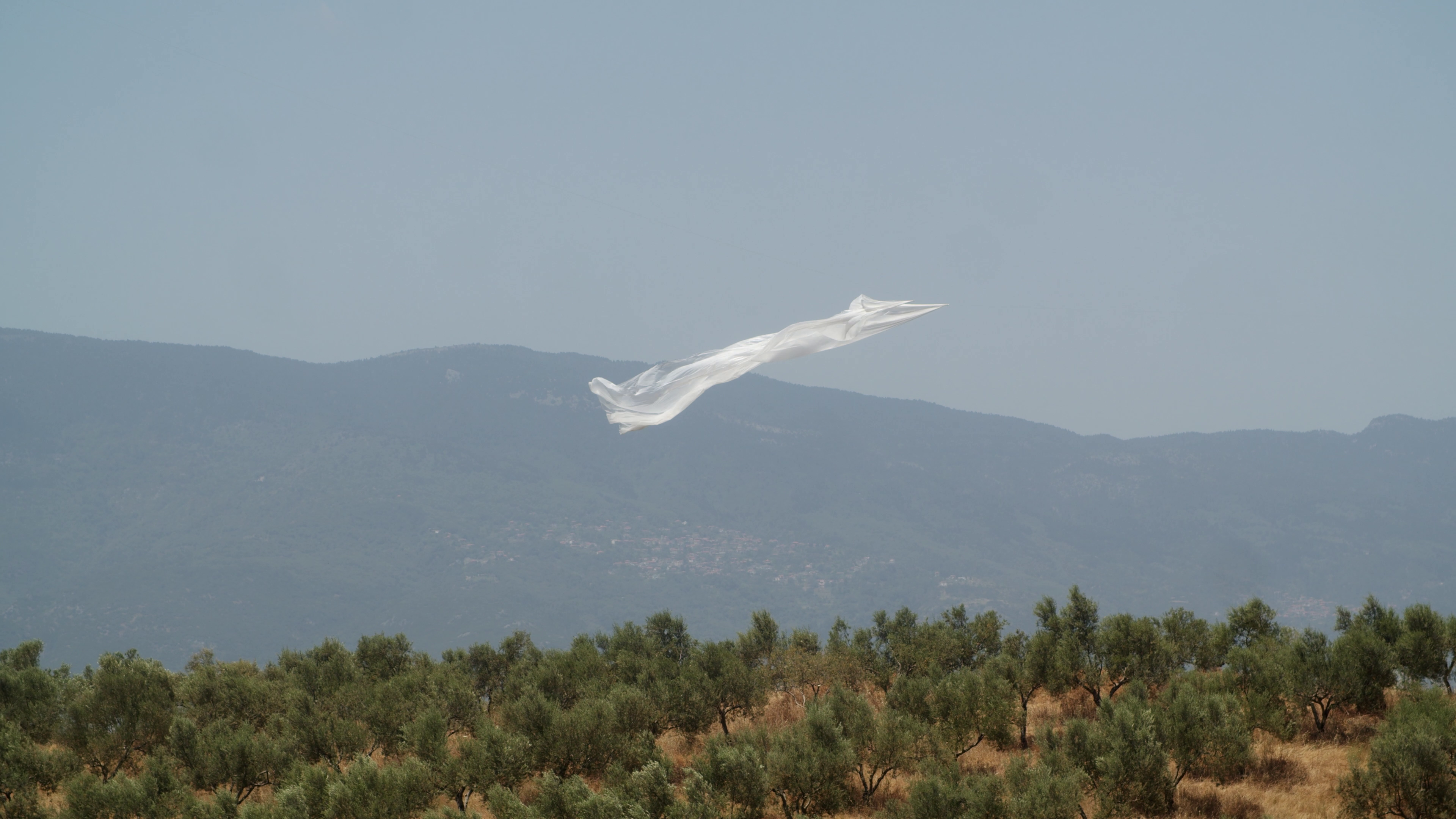